A rather arrogant goddess wants to skin the face off the most down-on-his-luck warlock you could possibly imagine. YOU can save him for only $0.99. Click HERE. 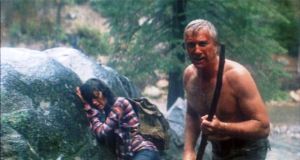 “Don’t worry, Lynda! My man-boobs are more than a match for this crazy beaver coming at us.”

RUDIMENTARY ANALYSIS: Oh, this is so much fun! If you were a kid growing up in the ’80s, chances were good that the schlockiest TV “Movie of the Week” offerings from the 1970s were still being rerun several times a year to remind 1980s people how lucky they were to escape the ’70s with their intellects intact! Of course, adults in the ’80s went on to fry those intact intellects with the suburban discovery of cocaine, so getting through the ’70s was a bit pointless it seems, after all, but that’s an entirely different blog.

Today we’re talking about the very idea of “survival” enshrined in what has to be one of the best BAD TV MOVIES that dazed and confused Hollywood writers ever managed to burp from their brains while nursing hangovers amid overflowing ashtrays, broken glass and strewn underwear at some daybreak poolside party they didn’t even remember attending. Afterward (say, an hour later) they cobbled the whole thing together as they guzzled margaritas in a Topanga biker-bar to fuel the creative supernova.

WRITER 1: “Yeah. Oh, yeah, man. Animals going, like, CRAZY, man! I mean owls and eagles and weasels and shit like that. Attacking. Just, like, for no reason. Chickens! Chickens pecking peoples eyes out and stuff like that.”

WRITER 2: “So cool, man. But, like, the animals can’t go berserk for no reason. This is where our story’s got a serious hitch, dudes. I mean, so many different animals flippin’ their lids? You gotta have a reason for that.”

WRITER 3: “You two need to become troubleshooters if you’re ever gonna make producers. Look. Only animals above an altitude of 5,000 feet go bonkers and start killing a buncha hikers and we blame the whole thing on the ozone layer. Ozone layer’s hot topic right now. So’s Leslie Nielsen. We find a way to throw him in the mix.”

WRITERS 1 & 2: “Whoah. Man, you are so up to speed. We got ourselves a movie. Bartender! Three more margaritas! And make ’em Cadillacs.”

And Greatness was thus (possibly) born. 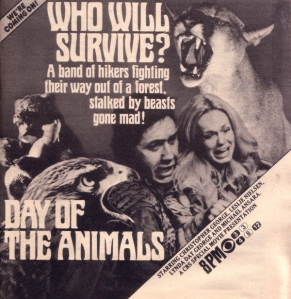 Forget the Killer Animals … Who Survived the Shame of WATCHING this Fabulousness?

Day of the Animals was indeed a 1977 film about a group of mid-level Hollywood SAG members getting unexpectedly attacked by every furred and feathered creature imaginable while hiking precisely above an elevation of 5,000 ft. because the depleted ozone layer was allowing Nutzoid Radiation Rays of Rabidness to penetrate animal “minds”. The setting for this nonstop terror-fest was (surprise!) “somewhere in Northern California” because that’s where all the ozone-layer neuroses on Earth emanate from addled human minds like a great pulsating Doom-Ray — a Doom-Ray which, ironically, has burned a hole in the ozone layer that didn’t previously exist. But that’s another blog. Movies of the 1970s were especially obsessed with exploiting any kind of crap that might possibly petrify Paul and Pamela Polyester from Peoria: sinking ocean-liners; burning skyscrapers; angry pubescent girls with telekinetic powers; bee swarms; possessed cars; earthquakes (lots of those); and anything with a tooth in its head sharp enough to bite, really. TV movies distilled this sort of “mundane disaster-phase” in the American zeitgeist to perfection with Day of the Animals.

Leslie Neilsen fights a grizzly bear. Lynda Day George (who must’ve been in every freakin’ TV Movie of the Week in the ’70s) screams and runs, screams and runs, fights-off an owl or two. German Shepherds wild with Ozone Cray-Cray corner everybody in an isolated cabin at the end (of course). Frankly, it all sounds like just another ordinary day in Idyllwild or Eureka or Hemet, California, but that, too, is another blog. Suffice it to say that TV-zombies were inconceivable, back then. Who needed ’em? You had ANIMALS! With beaks and claws and things! You had a hole in the ozone layer turning the galldarned bunny rabbits against you! Enough said. Terror was never, ever so deliciously bad.

DEFINITIVE DIALOGUE: “God sent a plague down on us because we’re just a bunch of no good fellers.”

Escape the Imminent Collapse of Civilization, Friends, if Only for a Few Hours. Get acquainted with the comparatively sane world of Rowan Blaize …

A deliciously twisted magical adventure is born with Rowan Blaize and the Enchanted Heritage Chronicles. Use any of the Rowan Blaize book icons on the upper-right (or use the links below) to learn more or purchase with an enchanted click.