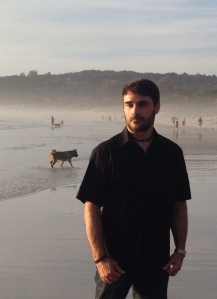 There’s a great deal to be said for the first, fecund, felicitous forays of the Springtime social calendar, particularly in Northern California. The atmospheric stasis occasioned by the weird workings of winter always seems to give way to a somewhat rejuvenated sense of ambition, for me. At the very least, the advent of beach-worthy weather affords various opportunities to commune with friends who are likewise climbing out of their respective doldrums, and this quickening of personal activity and interaction can retroactively energize the artistic work you’ve slogged through for months without much satisfaction or sense of reward. Believe me: the writer seems by turns isolated and interrupted in the winter months — navigating temperatures that make him want to sleep far more than he wants to write and fielding invitations to any number of Food, Friend & Beverage Orgies (aka “The Holidays”) that tempt a craftsman with far more seductive festivity than can be enjoyed hovering over a keyboard.

I’ve been writing non-stop since June 25, 2013, and have completed, beyond my own rather panoramic sense of comprehension, two novels in that time. That’s usually not in my wheelhouse. Normally, I believe a truly worthy long-form work ought to take at least a year to complete, not including a full edit. Nevertheless, the industry has undergone its eighty-eighth metamorphosis in the last ten years or so, and its demands, which seem as unpredictable and arbitrary as the flailing of a multi-headed Hydra, must be met with some measure of mettle and elbow grease. In this sense, the accelerated nose-to-the-grindstone process has been both challenging and revelatory … at least now that my “foolish boat” has sailed around the churning Aegean vortex into calmer waters.

The second of the two novels I finished was delivered to my editor on May 1 after a month and a half of rewrites and assorted fussings and fidgetings. This is the book that will be published in October of this year, with the other novel (the one started in late June 2013) to follow next year, presumably. There will be a reasonable amount of promotion and preening and as much ballyhoo as can be mustered for the October release, and that roll-out promises to be filled with new, perfunctory “adventures” I am certain to loathe, but it must be done. These children must be given the privilege of birth, after all, seeing as how they survived the wordy womb of the author’s addled brain. Let them be fruitful and multiply. Let them possibly even subdue the earth.

That last bit would be nice, in a monetarily metaphorical sense.

News about the new book, from what I can gather, will start to manifest itself in the form of drum-beats about a month from now, with review copies going out by July. I’ll believe it when I see it. Fellow authors–you all know what I’m talking about, here. That being said, much gratitude goes to my agent, the indefatigable KR, and to all who have so not helped me complete these major projects (Just kidding, support-system peeps! Calm yourselves. Have a little mojito. That’s the way. Now chew a couple of Klonopin. Feel better? Sure, you do. Who wouldn’t?)

In the meantime, May is a great month for writers (who aren’t working Spring releases) to take a deep breath before any ensuing literary plunge. Go to the beach, if you live near one. Walk in the woods. Breathe. Get drunk (responsibly) and laugh with a few trusted friends who won’t make fun of your incessant ramblings and do try to shut your mind off for a bit. That’s what I appear to be doing in the photo above, which was taken on May 1, after an impromptu invitation to a bonfire on Carmel Beach, a little shindig put-together by some dear friends — one of whom cooked a fabulously authentic Cajun gumbo (complete with okra and Andouille and all the “fixins”) right there amid the sands to the accompaniment of music, mellifluous laughter and a memorable sunset.

Then again, I could also be undergoing an existential/spiritual crisis of catastrophic proportions in that photo. Hard to say … or remember. Either way, I look pretty good. So it can’t be all bad.

Jonathan Kieran’s new novel is slated for release in Autumn 2014. Look for news about the book here and at Amazon.com in the coming weeks and months.

← I was still willing to give cinema the benefit of the doubt. Then I saw Hansel & Gretel: Witch Hunters #despair
What if #Godzilla starred in a big new movie and he couldn’t find his motivation? →