Pop HazMat Alert: A Foreshock for Something Larger 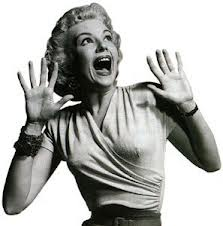 HAZMAT HEADLINE DU JOUR: “So-Cal Quake Could be Foreshock for Something Larger”

RUDIMENTARY ANALYSIS: The “Big One” is imminent, at least in the geological perspective of time, no matter how many minor jolts pester airheaded Californians on a daily basis.

EXISTENTIAL RAMIFICATIONS: Widespread death, destruction, and anarchy with nuances of cannibalism and potentially troublesome episodes of zombification, particularly in West Hollywood. This is to be followed by an eventual boom in the construction industry resulting in reversal of California’s already catastrophic unemployment woes. Fiscal solvency, however, is never to be envisioned. It will always be California.

TAKE-AWAY QUOTE: “Was in my car at a stoplight in Chula Vista and felt it.” (Mollie Nunn)

DETOX DINNER: Rice-a-Roni Apocalypse-Style! (Add chicken if barrel-fire is at all possible.*)

* Substitute chicken with neighbors’ pet if chickens are scarce and neighbors are deceased and/or unarmed. Seared Shih-Tzu adds an especially satisyfing texture in juxtaposition to spices contained in sauce-packet.