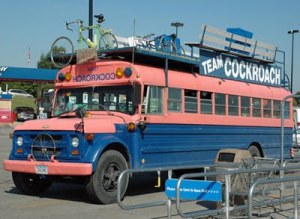 CULTURAL TOXICITY QUOTIENT: 7.5 [Considerable. The cockroaches were not at all pleased with the quality of Greyhound’s human clientele and were worried about the spread of potential diseases, to say nothing of rather questionable moral standards.]

RUDIMENTARY ANALYSIS: A Greyhound bus en route from Atlantic City to New York was forced to pull over in Park Republic when cockroaches complained to the driver about the exceptionally repulsive nature of that morning’s human passengers, likening the group of forty-eight people to an “infestation”. The bus driver assessed the situation, agreed thoroughly with the disgruntled insects, and phoned headquarters. Greyhound immediately sent a second bus to pick up the 9,672 cockroaches, who continued their travel into New York under what one roach described as “much more pleasant and satisfactory conditions.”

EXISTENTIAL RAMIFICATIONS: Sociologists and officials from the CDC may wish to work in tandem with state and federal boards, devoting their energies to exploring alternative modes of transportation if cockroaches are indeed finding it increasingly difficult to tolerate the presence of human travelers. Something has got to be done.

TAKE-AWAY QUOTE: “I honestly felt bad for them. Poor damn bugs. I mean, we get some mangy lookin’ characters on our routes pretty much all the time. Driver like me gets used to it, ya know? But this bunch today was above and beyond the call of duty. Hoo wee. Maybe I’ve gotten too desensitized over the years or something, ‘cuz even I had to agree when them cockroaches complained. I’ve never had this happen before. Never. I’m thinking it’s time to get that job with Carnival Cruise my wife keeps nagging me to look into. Then again, I hear the roaches won’t even take that line anymore. What’s the world comin’ to? Can you answer me that?” (Ralph Cramden, driver)

MUSICAL REHAB: We Will Survive (The Cockroach Song) by Stuck in Detention

*Clearly I’m in a cynical mood about the human race today, friends. That is not typically the case. The Greyhound bus headline, however, was begging for a twisted satirical treatment. For the real story (which wasn’t much of a story) click the headline link. Photo via pudkearns.blogspot.com

~I have written a new series of contemporary fantasy/horror books about a cynical 2,000 year-old sorcerer stranded among mortals and forced to feel sympathy for humans when a nasty goddess plans a mass-extermination. You know … one of those “everyday” occurrences. My warlock’s name is Rowan Blaize, the books are the kind that adults (and even young adults) will find fiendishly delicious in that mythical Star Wars-y universal Good vs. Evil sense (with some twists, I admit) and you can buy them here, at Amazon, in Kindle or paperback format, a mere click away. Enjoy, and let me know what you think. I care. – Jonathan Kieran