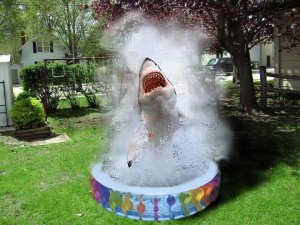 CULTURAL TOXICITY QUOTIENT: 9. 5 (Near-Catastrophic. Target would have handled this with so much more dignity.]

RUDIMENTARY ANALYSIS: Despite frenzied attempts at revivification via oxygen and shots of adrenaline, a 5-ft. white-tipped shark died of likely humiliation after spending an undetermined amount of time in a “small above-ground pool” in a Van Nuys, California backyard, being subsequently flown from Los Angeles to New York, and placed in a pool full of manic, cannonballing humans for the purpose of filming a Kmart television advertisement, which many wildlife experts consider to be the ultimate insult in the entire animal kingdom, probably. PETA representatives are slashing their forearms in angst with bats’ teeth and currently investigating the case of shark-abuse. “Whistleblowers” are involved. The late shark’s booking agency, Critters of Cinema, has refused comment due to confidentiality agreements. The shark’s identity has not yet been revealed pending notification of next-of-kin by officials.

EXISTENTIAL RAMIFICATIONS: Anything forced to spend time in a shallow, above-ground backyard pool in Van Nuys, California, is probably not destined to survive long upon the earth. Let this be a lesson to sharks, shark-handlers and aspiring Kmart TV-commercial starlets and underwear models everywhere. Team PETA.

TAKE-AWAY QUOTE: “We were there. We did not allow any people in the pool with the shark.” (Karen Rosa, senior adviser to the Kmart film and television unit)

~I have written a new series of contemporary fantasy/horror books about a cynical 2,000 year-old sorcerer stranded among mortals and forced to feel sympathy for humans when a nasty goddess plans a mass-extermination. You know … one of those “everyday” occurrences. My warlock’s name is Rowan Blaize, the books are the kind that adults (and even young adults) will find fiendishly delicious in that mythical Star Wars-y universal Good vs. Evil sense (with some twists, I admit) and you can buy them here, at Amazon, in Kindle or paperback format, a mere click away. Enjoy, and let me know what you think. I care. – Jonathan Kieran