HAZMAT-RETRO HALL OF LAME (LOVABLY BAD FANTASY CINEMA): Trolling for Ideas, Were We? 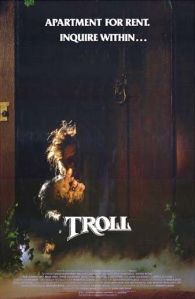 RUDIMENTARY ANALYSIS: Whoah, is this stinker ever loaded with the Buckshot of Badness! Hoo-wee, is this flop also a Scattergun of Suspicion! You’ve got Elaine Benes from Seinfeld, Ben Stone from early Law and Order and Timmy’s mom from Lassie, along with “Chaz” Bono’s daddy and noted thespian Shelley Hack (among others) in a fantasy film about a wizard-turned-troll who bewitches a young girl who must be rescued by her brother, whose name is … er … Harry Potter. Harry Potter asks an old sorceress (Lassie’s Lockhart) to teach him magic in order to save Big Sis. Moreover, you’ve got fairies, nymphs, goblins, and elves thrown into the mix that constitutes Harry Potter’s magical challenge. Harry is eventually armed with a magic stick that shoots bolts of energy. Okay. Let’s just get it out in the open. Does it sound like someone-now-richer-than-the-Queen of England pinched a fair amount of inspiration from one of the worst fantasy movies ever made? (Picture it — a hypothetical coffee-shop in Britain, where a young lady pauses for an instant over her notebook and says: “Piffle and rubbish! Wot wot! Nobody’s ev-AH going to remem-bah that bloody awful bit of cinematic spotted dick!”) Hmmm. Whatever the case may be, Troll is a moribund magical masterpiece of bedraggled special effects, terrible performances, abominable ’80s hair (even, ostensibly, on the troll), and a plot as painfully awkward as Elaine’s dance moves on “The Little Kicks” episode of Seinfeld.

DEFINITIVE DIALOGUE: “I think what he’s doing is going from apartment to apartment and turning parts of this building into fairyland.”

BRUSH WITH GREATNESS: Um … the movie’s main character and hero, a wand-wielding wizard-in-training named “Harry Potter” … um … may have gone on to … um … a few “bigger” projects. Maybe.

LAMENTABLE LEGACY: Troll 2, Troll 3 and possibly staggering psychiatric bills for Michael Moriarty. Shame hurts. It hurts bad. Also, there are (and have been) some grouchy words and legal chain-rattlings over the (ahem) possibility that the identity of the real creator of the Harry Potter “character” is open to question. Personally, we at the HazMat think ol’ JK would have to have been a complete nincompoop to consciously “borrow” anything from this howler, much less her main character. And let’s face it: fantasy works of the “classic” type tend to share some universal similarities (wizards, witches, magical objects, old magicians, young magicians, hordes of fantastic creatures, etc.) no matter how respective plots or characterizations might differ.

WHERE ARE THEY NOW?: June Lockhart is NOT baking apple pies and serving collie-chow in the sky; she is still very much alive, THANK YOU. Michael Moriarty is some sort of “political refugee” in Canada. Sonny Bono is sadly no longer with us (Cher, however, remains). Julia Louis-Dreyfus writhes daily in a polished emerald tub filled with century-old Dom Perignon and worships at Our Lady of Resplendent Residuals. Noah Hathaway (“Atreyu” in 1984’s Neverending Story) was last seen in something called Mondo Holocausto! Shelley Hack is a sometime producer (see Zombie Blondes, 2012).

EXPERIENCE THE MAGIC: Harry Potter knows how to USE that wand!

~I have written a new series of contemporary fantasy/horror books about a cynical 2,000 year-old sorcerer stranded among mortals and forced to feel sympathy for humans when a nasty goddess plans a mass-extermination. You know … one of those “everyday” occurrences. My warlock’s name is Rowan Blaize, the books are the kind that adults (and even young adults) will find fiendishly delicious in that mythical Star Wars-y/Lord of the Rings-y universal Good vs. Evil kind of way (with some twists, I admit) and you can buy them here, at Amazon, in Kindle or paperback format, a mere click will suffice. Enjoy, and let me know what you think. I care. I really do. – Jonathan Kieran