The Terror of the Skies in the Pyrenees … or just a stinky bird trying to make a living?

CULTURAL TOXICITY QUOTIENT: 0 (Nothing Toxic About Nature Taking Its Course)

RUDIMENTARY ANALYSIS: Let me make one thing clear: there is NOTHING funny about the poor woman who fell 300 ft. to her demise while hiking in the Pyrenees. May she rest in peace and may all condolences be rendered to her grief-stricken family. What is somewhat (and darkly) funny is the reaction of the local gentry to the fact that the woman was apparently consumed by a flock of Griffon vultures before rescue teams were able to claim her remains from the mountainside. Local Pyrenees farmers, perhaps understandably appalled by the idea of a person being so swiftly consumed by flesh-eating birds the size of washing-machines, were pretty swift themselves in trundling out a number of tales that seem suspiciously “tall.” Griffon vultures are a protected species that are apparently in permanent Ravenous Mode because of a ban in the Pyrenees on leaving the rotting carcasses of farm animals exposed, due to disease transmission issues. This, some are speculating, is one reason that Griffon vultures are flying around the mountains drooling over anything that looks like potential foie gras. I see some problems in this story.

First, what sort of self-respecting farmer leaves any dead livestock carcass outside to rot on his farm, if he knows about it? Second, the Pyrenees Mountains are hardly void of other forms of wildlife that presumably drop dead in the woodlands. Certainly Griffon vultures have a wide range of carrion upon which to “carry on.” Following the admittedly grim consumption of this unfortunate accident-victim, locals are now proffering stories about great flocks of Griffon vultures circling over the heads of innocent little children as they play in their yards (or fields) and of unspecified animals being “carried off” by the large birds. Frankly, I would pay to see a “flock” of vultures carrying off a sheep, or perhaps a pig. Why? Because it just doesn’t happen. Vultures do not swoop down out of the skies to carry things off for supper. They are not built for that sort of maneuver. Not in the Pyrenees. Not in Africa. Not out here in the wilds near Big Sur, California, where we’ve got the biggest vultures of them all (AKA condors). 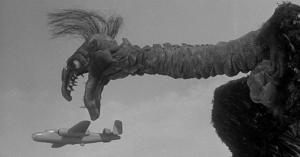 Isn’t THIS the bird that should be feared by farmers (and aviators) throughout South France?

Vultures hone-in on the scent of putrefying flesh (be it mutton or man) and then they circle a bit to alert the neighbors to the presence of a smelly smorgasbord, followed by a descent (in often visually intimidating numbers) to serve their purpose in the ecosystem by scavenging the remains. They “hunt” (if it can even be described as hunting) for dead things. Period. Case closed. One farmer from the Pyrenees mentioned seeing a flock of Griffon vultures actually attacking one of his cows and eating it alive as it presumably mooed and moaned and tried to run. Sorry. Not buying that whopper for an instant. I could be quite mistaken, but I believe “Farmer Lafitte” just might have been hitting the Courvoisier a little hard that particular day. Besides, what French farmer, when he sees one of his prized cows being attacked by anything short of the Beast of Gevaudan itself, would fail to rush out into the field with a pitchfork (or at least a big cassoulet spoon) and a stirring cry of “Vive La Revolution!”?

The Pyrenees region is one of the most extraordinarily beautiful in the world, and its people are among the most hospitable. The things they can do with a pot of white beans alone will always keep them rated near the top of my list of The World’s Most Exquisitely Industrious Gastronomes. But they are also a people fond of dramatic exaggerations when it comes to telling a lively “killer animal story” from the heart of those magical, majestic mountains. I don’t blame them for being that way, not one bit. Makes life grand. But don’t blame vultures for being vultures. Their job is not exactly a “pretty” one, no matter where they are found in the world, but it’s an important one. And, again, condolences to the family and friends of the poor woman that fell off the ridge. Tragic.

EXISTENTIAL RAMIFICATIONS: What’s next? Vampire Goats attacking the pilgrims at Lourdes? (Actually that would probably make a great horror-flick …)

TAKE-AWAY QUOTE: “You can’t describe the horror of seeing something eaten alive!” (Again, what kind of mountain-farmer is THAT sensitive? Don’t they get The Walking Dead in the Pyrenees? Sheesh.)

THERAPEUTIC CINEMA: Is this what the people of the Pyrenees see when they spot a Griffon vulture? A MUST-WATCH after reading this article. Trailer for the “classic” film The Giant Claw.

DETOX DINNER: Courtesy of the folks at Jezebel. Get your vittles before the vultures do!

Escape the Imminent Collapse of Civilization, Friends, if Only for a Few Hours. Get acquainted with the comparatively sane world of Rowan Blaize …

A deliciously twisted magical adventure is born with Rowan Blaize and the Enchanted Heritage Chronicles. Use any of the Rowan Blaize book icons on the upper-right (or use the links below) to learn more or purchase with an enchanted click.
Amazon Kindle Version (Only $0.99 Each!)
Book One
Book Two
Book Three
Amazon Author Page (Kindle and Paperback versions)
Barnes and Noble
IndieBound
Books-A-Million
Rowan Blaize Official Website
Goodreads