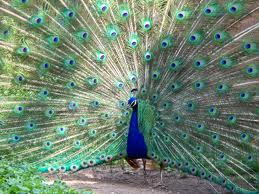 Lock-up your macaws, your cockatoos, your ibises, your peacocks and anything with a come-hither tailfeather, friends. Our species has officially “jumped the shark” when humans are officially jumping exotic birds.

CULTURAL TOXICITY QUOTIENT: Not Even Quantifiable. PETA had better come out guns a-blazin’ on THIS sordid mess.

RUDIMENTARY ANALYSIS: Another day, another twisted devil-crime coming out of the Chicago area. Police are calling it “murder most fowl.”

EXISTENTIAL RAMIFICATIONS: Is it too late to sign-up for that one-way ticket to Mars? Not for the Peacock Perv. I’m thinking of going myself, frankly. I have a feeling the atmosphere just might be a little healthier on the Red Planet.

TAKE-AWAY QUOTE: “When and how Phyl died is unclear. But Roselle police indicated they saw the bird’s body in the garage of Beckman’s home on the night of April 28. Police had seen the bird alive at the home before that date.”

Escape the imminent collapse of civilization, Friends, if only for a few hours. A sweeping modern fairy-tale is born with the Rowan Blaize series of books …

Book One = The magical cornerstone – a lavishly illustrated epic poem and “spell” to treasure for a lifetime, telling the story of sorcerer Rowan Blaize’s fall from power. (Think Beowulf-meets-Dr.Seuss)

Book Three = The novel that finds Rowan trapped by a spell in another world, caught between a faery-squashing sorceress who’ll stop at nothing to conquer the kingdom … and a feisty teenage prince who’s determined to get it back.

Click here to purchase the special $0.99 Kindle e-books and watch a video of Jonathan discussing his work.