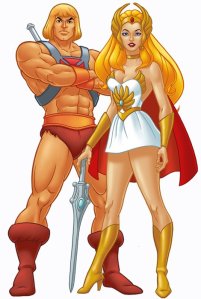 He-Man and She-Ra … Padding the bank accounts of psychologists specializing in Body Dysmorphic Disorders since the 1980s!

RUDIMENTARY ANALYSIS: If you were a trendy child growing-up in the 1980s and early 1990s, there’s little chance you escaped the pop-culture gravitational pull of He-Man and She-Ra, who were basically two sword & sorcery action-figures with their own animated Saturday morning infomercials thinly disguised as kids’ TV shows. He-Man came first as you were spooning Cap’n Crunchies into your spellbound face and dripping sugar-saturated milk all over your jammies and onto Mother’s new JC Penney area-rug. But you could hardly look away when He-Man sauntered across the screen in all of his garish, stilted-animation glory. He-Man was essentially a warrior-type dragged from any garden-variety epic fantasy novel, stripped of every piece of clothing a warrior would need, except for a colorful jock-strap and boots, pumped with a regimen of steroids that’d make Lance Armstrong look like a dilettante and armed (of course) with a magic sword.

Or maybe the magic sword was the talisman of She-Ra, He-Man’s twin sister, who got her own spin-off show/infomercial so the little girls and the gays would have something to razzle their dazzle while masticating Cocoa Puffs and Pop Tarts from 9AM til Noon on weekends. She-Ra was as overblown as He-Man, for these were the days when slightly doughy or out-of-shape heroes (like TV’s Batman and Robin or the skinflint “Shaggy” from Scooby-Doo) just couldn’t cut the cartoon mustard any more, so kids were being presented with progressively exaggerated images of the human body and schooled in the importance of having Big-Gulp secondary sex characteristics when the time came to transform into one’s crime-fighting alter ego. Thus, She-Ra was stacked like a particularly earnest Hooters waitress working the Halloween shift in a costume she spent maybe ten minutes putting together out of a tablecloth and some ornamental napkin holders from the Pic-N-Save. Her boobs were honeydew-perfect and seemingly attached to her chin, which looked like the surgically sculpted masterpiece of some sought-after Beverly Hills body butcher. Those Power Ta-Tas did not flinch an inch when She-Ra was conquering the forces of evil! In fact, it was probably her chi-chis that poked Skeletor’s eyes out … though the series never addressed that likelihood, to my knowledge. 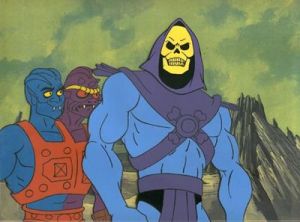 Skeletor … Blinded by the Mighty Meemies of She-Ra or just a rip-off of Ghost Rider in Dungeons & Dragons drag?

She-Ra’s gargantuan hairdo was a thing of splendor in and of itself — daunting enough to make all 43 of the weaves and assorted clip-on wigs atop Beyoncé’s head writhe like Medusa-snakes in anger and envy. He-Man actually had even bigger and more ridiculous breasts than She-Ra. His torso looked like an airbrushed Smithfield ham balanced atop the legs of a Clydesdale draught-horse, with a baby watermelon stuffed in his red bikini.

For about fifteen minutes during the ’80s, we all loved these shows and couldn’t get enough of the ADHD-inducing drama, much less of the action figure tie-ins and “accessories sold separately.” Then we grew up, as well-adjusted children ought to do, and we moved on — thoroughly prepared for a culture of pervasive internet porn, rampant body dysmorphic disorders, obsessive workout regimens, bodacious breast augmentations, fake hair, fake names, fake intelligence, fake values, indiscriminate displays of physical violence and a vast gallery of narcissistic smartphone “selfies” taken in front of bathroom mirrors by the millions. It’s a lot easier to work for a set of ripped abs or buy a smokin’ hot rack than to fight the Forces of Darkness, these days. Fighting evil with magic swords? Nah, we didn’t bring that part of the show into the new millennium. We just brought the hotness and the Evil.

DEFINITIVE DIALOGUE: Here’s 10 indispensable He-Man quotes steeped in the kind of wisdom that explains exactly why your kids turned out the way they did.

EXPERIENCE THE MAGIC: The classic He-Man Intro. Note how the “pre-transformed” Adam (Prince of Eternia) appears to be voiced by a 59-year-old Presbyterian radio-announcer from Topanga with a deviated septum.

← Sally Field cringes today at her Flying Nun career-choice, but it inspired Richard Branson’s Virgin Air. #NOT
A man of few words and much wretched thought? Crowe could play that in his sleep #dreamrole →