The things a star will do when denture ads just won’t pay the rent! #nostalgia

“I swear to God … it was this or a commercial for denture tablets. Don’t judge me, beeotches!”

RUDIMENTARY ANALYSIS: Denture commercials were clearly not paying enough cold hard $$$ to keep an aging Hollywood train-wreck in the style to which she had become accustomed in the 1970s. All Martha Raye needed back then was enough nickel to buy Tanqueray, some ciggies and maybe a new speedo for the occasional escort, but Polident Green must’ve been giving Martha a case of the Poor-House Heebie Jeebies with the $125.00 they were probably offering to shell-out so she’d show America how to scour their big yellow falsies in a cup. I bet Martha even had to soak her own fake choppers in her super chlorinated flesh-melting backyard pool overnight in Bel Air. Polident Green kept their budget LEAN … and probably didn’t even give their National Spokeswoman a lifetime supply of tablets that could sizzle the rotting bits of gristle from betwixt the cracks of her Take-Out Teefs.

Drastic measures were required and Martha Raye, being a rough-and-tumble survivor of the Big Studio System of the 1940s, took the most drastic measures ever known in the world of entertainment: She got fitted for a costume on one of Sid & Marty Krofft’s abominable kiddie-show productions. Yes, Martha Raye hopped right into economy-class on the Bullet Train to Embarrassment-Land when she took the role of “Benita Bizarre” on the Bugaloos — a masterful piece of Pure Televised Glory in which several British “fairies” in bellbottoms and psychedelic tee-shirts dwelt in a magical forest, seeking a record company dumb enough to pay them actual dollars for the Offensive Musical Slop-Sounds emanating from their obscene orifices.

Martha Ray’s character, Benita, was sort of a cartoon-land cross between Phyllis Diller and Pia Zadora: a repulsive, untalented bag who cracked jokes, wore low-rent versions of the ridiculous crap Lady Gaga later became famous for and surrounded herself with sleazy morons who convinced her she was the greatest singer the world had ever known. Martha Raye’s shrewd essay of the “Benita Bizarre” role featured a lot of disorientation: staggering; stumbling; mugging and mumbling, as well as gratuitous displays of Martha’s spindly legs sprawled-out like some diseased chicken’s getaway-sticks beneath skirts trimmed with ostrich feathers. The plot of every Bugaloos episode was the same: Benita was jealous of the Bugaloos (who always looked as if they hadn’t bathed or brushed their gnarly English teeth in weeks) and she plotted ways to thwart their dreams of recording hit after unspeakable hit, employing henchmen named “Tweeter” and “RatFink” in her Evil Campaign.

I’d like to have been a fly-on-the-wall the day Martha Raye’s agent (probably a guy named “Morty”) first presented her with the Bugaloos script. You know the meeting took place in Martha’s bedroom and you know she knocked back a whole tumbler of gin and then threw the glass at poor Morty, who wasn’t nearly swift enough to duck in time to avoid lacerations to the forehead. Then, after Martha fished her dentures out of the tingly Polident bubbles on the bedside table and inserted her fangs, she let Morty really have it: 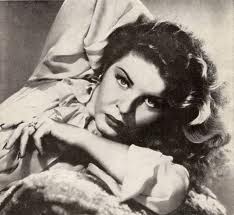 MARTHA RAYE: “What’s this two-bit hippy fairy garbage you’re asking me to play, huh Morty? Saturday morning kiddie shows about Bugs? Bugs? This is all you can do for the great Martha Raye? I’m supposed to play in a show about British insects? I can barely keep the roaches out of this cracker-box on the salary those Polident bastards are offering to give me, Morty!

MORTY: “But Martha, these Krofft boys have a great track record with the public, and this Benita Bizarre person … well, she could be the start of a huge comeback for you. Sump’n big. America’s starting to get a little tired of looking at the inside of your mug in them falsie-scrubbing ads, I gotta tell ya, Martha. Focus groups have been saying that your tongue looks furry and some people even claim they can smell your halitosis through the television screen.” 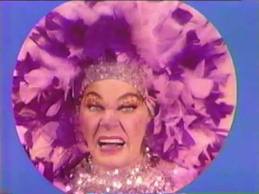 MARTHA RAYE: “That’s outrageous, Morty! I make sure to suck on five or six of those wintergreen Polident tabs before every shoot. Damn things burn like battery acid and now I got a big infected hole in the roof of my mouth, but those white tabs get rid of the gin-breath in five minutes flat. I swear, Morty! Besides, people can’t smell anything through a television screen.”

MORTY: “You know that and I know that, Martha, but what was it Louis B. Mayer used to tell you? ‘Perception is everything,’ especially in the entertainment racket.”

MARTHA RAYE: “God, Morty, you’re right. He did say that, right after I fell off the soundstage and passed out in a pool of my own puke while filming Four Jills in a Jeep. Oh, that was one helluva week, I can tell you, Morty. Say, what are they gonna pay for this Boogerloos gig?”

MORTY: “It’s Buggerloos, honey, and now we’re getting to the good part. They pay $175 an episode, which is twenty-five clams more than you’re making for them denture spots, and best of all you get to keep the entire wardrobe from each show. They also say you can smoke and drink all you want on the set.” 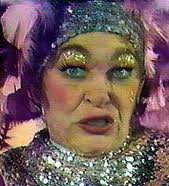 MORTY: “Yes. In fact, the Krofft boys told me they’d actually prefer it if you came in as shitfaced as possible.”

MARTHA RAYE: “Say, that sounds like a sweet deal, Morty!”

MORTY: “What can I say, Sugar? They want the Martha Raye that all of America has come to know and …er … love. Yeah.”

MARTHA RAYE: “I’m in, Morty. Here. Help me out of this puddle of bile around the pillows and kick those empty Seagram’s bottles over to the door. Consuela will pick ’em up when she comes next month to clean. I’m going down to NBC to sign that deal on the dotted line. Today! Wait’ll those wiseguys over at Polident get a load of me on this hot new show. We’ll be able to milk at least another C-note, per commercial, out of those stingy turds. Bring my limo around while I hunt for a clean turban, Morty. We’ve got a deal to strike.”

MORTY: “I … uh … I had to pawn the limo last week, Martha. Your dog hasn’t doin’ so good down to the track and you owed a lot of dough. I asked the Polident people to maybe give you a little advance and, boy oh boy, their wallets suddenly got tighter than a nun’s ass.”

MARTHA: “You don’t say. A nun’s ass, eh? Well, screw that. I’ll get the last laugh with those high and mighty bigshots when Benita Bizarre becomes the most beloved character among the children of the United States of America. Don’t just stand there, Morty. Call me a cab and pour me a fresh one while we wait! Hey … have you seen my upper set lying around anywhere? Damn that Polident!”
____________

The Bugaloos ran for one excruciating season on NBC (17 episodes) but found a cult-following in syndicated reruns. Martha Raye (a tirelessly dedicated –even decorated– performer for World War II Troops and genuinely beloved comic icon from Hollywood’s Golden Era who did later make bank schlepping denture tabs) lived out the rest of her tempestuous personal life in Bel Air until 1994, seven times married and (sadly) legless. She generated some controversy toward the end of her days by marrying a bisexual man three decades her junior, suing Bette Midler for allegedly “stealing her life story” and disowning her only child, Melodye, to leave a $3 Million legacy to boy-toy/husband, Mark Harris, who has since made the rounds of shock-programs like The Howard Stern Show to regale people with personal details from the life of Benita Bizarre. Sounds like the work of British fairies with a grudge. Still, you just know those Brits are all wearing dentures now and scrubbing them with Polident, so maybe Martha had the last laugh, after all. One can only dream.

← When Space Oddities Attack: #Hubble Telescope sees ALL
Ever had a bone to pick with the whole #onlinedating thing? You’re not alone. →