I confess to undergoing a somewhat disturbing phase in my youth–one in which I imagined utterly cheerless “alternative plots” and dark, warped endings to various beloved Christmas cartoons (particularly ones featuring cherubic little girls who were really snow-murderesses in disguise). I’m getting the help I need, but admit to being thrilled when Frosty first met his Rankin & Bass doom. Frosty was such a putz. Below is a G-Rated excerpt from a poem I wrote to illustrate my preferred version of the so-called “Professor Hinkle Incident.” Thumpity-thump-thump. 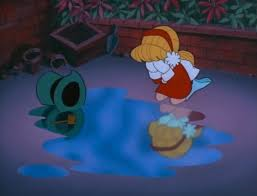 Frosty the Snowman was a jolly happy soul …
but little Karen was a girl whose heart was black as coal.
She lured him to a greenhouse with her dimpled, precious smile …
… then watched with glee as Frosty turned into a slushy pile.

← Memories: My 11th Grade Psych Teacher. #theyputheraway
“J” is NOT for Junk (in the trunk) #ChristmasCheer →