GOODREADS MEMBERS Click Here for a Chance to Win a Giveaway Copy of Rowan Blaize and the Hand of Djin Rummy by Jonathan Kieran. The Contest runs until June 10! 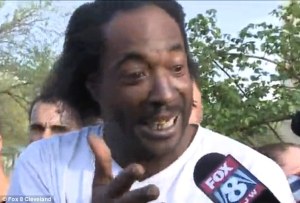 CULTURAL TOXICITY QUOTIENT: 3 (Quotient could increase if he is being coy just to get a “piece of the burger action.” For now, Charles gets the benefit of the doubt.)

EXISTENTIAL RAMIFICATIONS: In declining a future glutted with complimentary slabs of ground-cow with special sauce, lettuce and cheese betwixt sesame-seed buns, Charles Ramsey’s life-expectancy has now increased by 15 years. At least 40 cows are spared. Everybody wins.

TAKE-AWAY QUOTE: “I didn’t authorize my name to be used on any merchandise!”

DETOX DINNER: A Double-Double with fries from In-N-Out Burger. (Don’t worry … the cows are top-quality, the burgers are assembled by courteous Mormon-like youths and there are Bible-verses hidden on the packaging. These burgers taste absolutely sinful but are apparently God-Approved.)
_______________________