POP HAZMAT presents THE MOST ANNOYING CHARACTERS IN THE HISTORY OF KIDS’ TV! by JONATHAN KIERAN 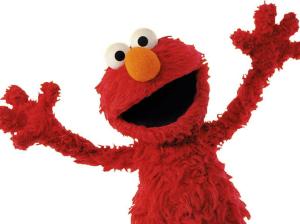 RUDIMENTARY ANALYSIS: Elmo is a tatty little Sesame Street monster with fur that is roughly the color and texture of Lucifer’s toilet-seat cover in the Moldering Skull-Palace of Hell. Ostensibly meant to represent a hyperactive, shrieking toddler (and we all know there’s nothing on this earth more appealing than that), Elmo was a puppet that somehow managed to bore his way into the American zeitgeist … like a worm masticating its pulpy path to the rotting core of a once toothsome and shiny apple.

Sesame Street staff writer Nancy Sans is on record describing the exact origins of the Elmo character: “There was this extra red puppet lying around and the cast would pick him up sometimes and try to create a personality, but nothing seemed to materialize.”

HA! CORRECTION, Nancy: The useless puppet had no “personality” before some vagrant demon from the Festering Pit of Perdition happened to “materialize” and inhabit Elmo’s wretched husk, like Pazuzu zeroing-in on little Linda Blair until she was doing the crazy head-spins and reciting Satan’s Alphabet backwards! Isn’t that what you mean, Nancy?!?

Anyhow, my fond memory of Sesame Street’s line-up of comparably sedate, reasonable and witty monster-puppets was dashed with the advent of Elmo. When the creative forces behind Sesame Street decided to explore the culture of the frenzied, infantile, babbling, screeching self-absorbed ME Generation by foisting the abrasive Elmo upon us, the Gateway to Armageddon was opened yet another fateful inch. Back in the day, Bert and Ernie were more than capable of teaching children valuable lessons about the need to coexist with fellow humans who happened to be insufferable idiots. Big Bird and Snuffelupagus were perfect for molding young minds into reasonably well-adjusted analytical thinkers of the future. The Count and Cookie Monster had their troubling OCD issues, it’s true, but at least they were linear in their weirdness and prepared kids to deal with a world full of lovable eccentrics. Oscar was indeed grouchy and probably a closet Republican, but his politically incorrect complaints were always on-target. You could learn useful things from that trashy fellow.

But Elmo? What in the world did that abrasive beast ever do for the good of child development? The glory of Sesame Street’s other characters rested in the myriad ways in which a four year-old kid could observe diverse ideas, absorb didactic constructs and attain progressively maturing cognitive skills due to the clever and childishly colorful array of informative adult-like puppets. Elmo merely offered kids a reflection of their own wheedling, whining, disconnected, demanding, distracted and bratty selves! The wretched little freak even referred to itself constantly in the third-person. This alone must’ve engendered God-knows-how-many borderline personality disorders among the impressionable youth of the past few decades. Kids don’t need mirrors — they need teachers. Elmo held up the meaningless mirror of narcissism to children when he came along and now look at what people in their 20s are doing! They’re posing in front of the bathroom sink with smartphones and taking inappropriate “mirror-selfies” to distribute and disseminate to the vast self-absorbed hordes trolling incessantly like drooling ghouls in the lecherous labyrinth of social media.

This, my friends, is the work of ELMO. Trust a former child.

BRUSH WITH GREATNESS: This mealy-mouthed, falsetto-voiced harridan has rubbed elbows with everyone from Rosie O’Donnell to Martha Stewart to Emeril Lagasse. Along the way, he has been the subject of two feature films and spawned his own, colossally annoying “fad doll” — the Tickle Me Elmo product that caused brats worldwide to threaten hara-kiri if their parents weren’t willing to cold-cock someone to obtain one in the ensuing department store stampedes.

LAMENTABLE LEGACY: Kevin Clash, the creepy-looking man who routinely stuck his paw up Elmo’s backside for decades, was sued by a slew of young fellows who claimed that he had engaged in sexual relations with them when they were minors. Clash, who gave the Elmo puppet its dreadfully shrill voice and “personality,” resigned from his role amid the scandal, claiming innocence. Tickle Me, Elmo, indeed.

EXPERIENCE THE IRRITATION: Look at this this way, parents of the ’90s. At least you’re only partly to blame for how exceedingly warped your children turned-out.

← Pop HazMat: Someone’s in the kitchen with Dyna-Girl. #popculture #nostalgia
Pop HazMat: Don’t pet the beaver if it’s not in the mood. #headlines #lifelessons #wildlife →