Pop HazMat: Don’t pet the beaver if it’s not in the mood. #headlines #lifelessons #wildlife

CULTURAL TOXICITY QUOTIENT: 9 (This tragic event is certain to scar the minds of youngsters who envision beavers to be loving, gentle creatures always willing to share a comforting pot of tea with strangers and help British children plot the downfall of frigid witches hell-bent on preventing magical lions from liberating oppressed kingdoms.) 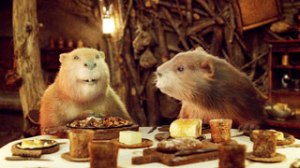 RUDIMENTARY ANALYSIS: Fisherman from Belarus approaches roadside beaver for a photo-op. Beaver responds with Garboesque “I vant to be alone” demurral. Fisherman insists. Beaver lunges with razor-sharp buckteeth. Beaver slices arteries in fisherman’s leg. Fisherman dies amid gushing fountains of his own blood. Shocked Belarusians launch vengeful PR campaign, claiming that beavers are deadly and aggressive beasts that should be thankful for the interest of the local paparazzi, instead of gnawing at them. Frustrated member of new Anti-Beaver activist group (“ubivat’ bobr!”) in Minsk demands to know: “Why not are filthy beaver of Belarus eager to pose for harmless leetle picture like equally hairy musky Kardashian rodents in America? Is ridiculous!” 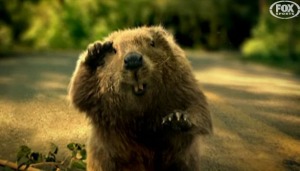 Beware the Fateful Fangs of FEAR

EXISTENTIAL RAMIFICATIONS: I have the same sort of difficulties with this story that I had with the story of the lady who fell off a cliff in the Pyrenees, died and was picked-apart by vultures in less than an hour before rescuers could get to her remains. The irate locals associated with that sad circumstance soon started proffering tales of “killer vultures” that were circling in the skies to target small children or swooping down to strip the flesh from terrified living cattle. I’m not buying the whole “killer beaver” meme, either, although animals unfortunate enough to dwell in the wilds of Belarus may indeed have cause for untoward aggression and may harbor any number of Post Traumatic Stress Disorders. What happened to this poor fisherman was undeniably tragic and one’s sympathies certainly must be extended to his undoubtedly shocked and dumbfounded family members (“He was keeled by a WHAT?!? His legs was WHAT?!?) Never the less, this unfortunate incident must inevitably be filed under the “FREAK ACCIDENT FOR TO HAUNT THE NIGHTMARES OF ALL BELARUS GRANCHILDREN FOREVER!” category. Mark my words, fifty years from now, weary and whisker-moled babushkas are going to be frightening unruly toddlers with ominous lines like: “Stop playing with damned beets and eat them or else I summon Demon-Beaver of Ostromechevo and it will come chew-off the feet at night in the beds!” One fact seems certain: the needless demise of this good fisherman (and budding wildlife photographer) would not have occurred at all if he had not “tried to grab the animal.” Wildlife-with-Teeth, friends.

“You want I should summon Demon-Beaver of Ostromechevo? He will come snap legs like wishbone from chicken. Do not mess with babushka today.”

TAKE-AWAY QUOTE: “We had never run into anything like this before.” –Leonty Sulim, village doctor, after observing the magnitude of the beaver-wounds.

THERAPEUTIC CINEMA: Day of the Animals

1 Comment on “Pop HazMat: Don’t pet the beaver if it’s not in the mood. #headlines #lifelessons #wildlife”