CULTURAL TOXICITY QUOTIENT: 9 (Today’s Emergency-Level CTQ has been assigned due to the obviously pervasive and bereft state of spiritual fulfillment currently afflicting society’s card-carrying nutjobs. We want our deranged friends and neighbors to maintain healthy nutritional regimens in this highly competitive climate of contemporary weirdness. Hearty appetites will allow our cherished freaks to bring on that steady stream of Crazy we all find so satisfying for years to come! Agonizing self-imposed death due to major organ malfunction is detrimental to the well-being of our collective cultural psyche. Unless these wackos film themselves, of course. Then it qualifies as entertainment suitable for the whole family in 2013, in which case the CTQ is reduced to 0. Hey, it’s all about value.)

RUDIMENTARY ANALYSIS: A 65 year-old Seattle woman named “Ravenna Shine” has announced to the world that she intends to subsist exclusively on a diet of water and sunlight for a period of six months. Ms. Shine, who insists that her cheerful, New Age-approved fake name is entirely unrelated to her tasty menu of dappled sunbeams and H20, is a member of an obscure cult called the “Breatharians” who claim to have been satisfying the munchies solely by licking the morning dew off Four-Leaf clovers and “catching a few rays” for thousands of years. 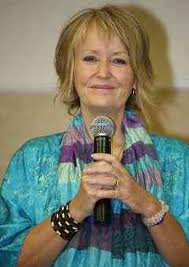 Australian guru “Jasmuheen” (born: Ellen Greavy) who actually teaches that humans don’t need food, but can subsist only on water, air, and Light. Jasmuheen claims to channel the spirit of a dead French nobleman (who presumably taught her all this shit) and her writings have been directly linked to the deaths of at least four mentally unbalanced and/or flat-out stupid people. Rumor has it the Aussie’s next spiritual book will be entitled: “The Dingo Doesn’t Need to Eat Your Baby — It Can Live on Dust and Moonbeams.”

The origin of the “Breatharians,” however, cannot be traced back through centuries of established spiritual tradition. Rather, their foundress was a delicate Australian spiritual butterfly named Ellen Greve, who changed her name to the far-more-marketable “Jasmuheen” in the 1990s and began actively promoting her unique brand of Sick & Twisted in books and lectures, all while allegedly keeping her larder at home well-stocked with goodies not obtained via solar flare. “Jasmuheen” claimed she had been living for years on nothing except cups of tea, but Australian journalists and doctors debunked her commercialized brand of Kook when it was demonstrated that she couldn’t last four days (much less four years) without turning into a dehydrated turnip on the verge of kidney failure. After receiving numerous Shame and Charlatan Awards from scientific and literary watchdog groups, “Jasmuheen” continued to schlep her glimmering bursts of brain-exhaust. These gems of orthodoxy inspired some of her dozen-or-so followers across the world to their deaths or, in the case of Seattle’s Ravenna Shine, helped them land an avalanche of prurient Facebook “likes” and headlines at Fox News.

A crackerjack Pop HazMat reporter recently caught-up with Ms. Shine at her Seattle home to discuss her exciting new spiritual discipline … and the concerns of a watching, waiting world.

“Ms. Shine, thank you so much for taking the time to speak to us today about your extraordinary new diet plan.”

“It’s not a ‘diet plan,’ you unclean shadow of the Outer Darkness. It’s a spiritual journey that shall revolutionize science, art, medicine and religion. I am the mighty new leader of a movement that’ll take nations by storm. World leaders will beat a pathway to my door seeking wisdom before this is over. Excuse me, but could you grab one of those Kleenex on the table and wipe away the drool running uncontrollably down my chin? I’d do it myself but I’m too weak and anemic to lift my arm.”

“Certainly, Ms. Shine. There you go. All cleaned up! Now, before we get into the details of your spiritual quest, I’d like to ask you about rumors going around that your name is not really ‘Ravenna Shine’ but that you are in fact Dolores Frack, daughter of the late Arnold and Mitzi Frack of Spokane. Any comment on that?”

“I do not answer to my soiled diaper-of-a-birth name. It is the oppressive construct of soul-murdering Vortex People who do not know the freedom and majesty of the Light. They lived, like so many, on the fumes of their own noxious perdition and the name they bestowed upon me was nothing but a burden. Thank goodness I fell down the cellar stairs ten years ago while going for some McIntosh apples and sustained those multiple fractures. During the subsequent month-long coma, I had a vision of Zbordak, Arch-Chancellor of the Planet Trollop, situated a million light years from Earth in the Nebula of Vapidity, not far from the Planet Smarm. He’s the one who turned me on to Jasmuheen and her brave truths about the power of Light and the folly of eating things.”

“How fascinating! Now, is this Zbordak fellow the one who gave you your name?”

“No, I got the name ‘Ravenna Shine’ from a shampoo bottle. They don’t make it anymore. It’s hard to sustain an organic business in these tawdry commercial times. But ‘Ravenna Shine’ was destined to be my name. Just ask the two people living in my knitting basket, right here next to the recliner. Go ahead and open it. I’d do it myself but the left side of my body has gone numb.”

“Well, sure. I can get that knitting basket open for you. Just need to unclasp this latch, like that, and … Oh, my word! What in the world do we have here?” 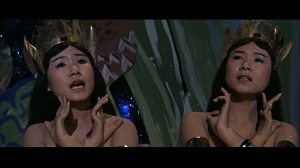 “Please! You must help us! This psychotic hag has kept us trapped in the knitting basket for weeks and says she’s going to eat us if there’s not enough sunshine and tomorrow’s forecast calls for cloudy skies and possible showers! We tried to summon Mothra but the fruitcake in the chair won’t —-”

“I must say — that was certainly a surprise, Ms. Shine. Who are those people?”

“Just my twin nieces, visiting from Enumclaw. Pay no attention to them. They’re very small and stupid because they were born with birth defects.” 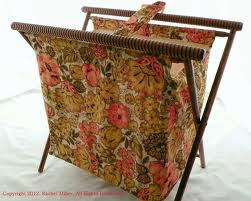 !!! You lying old Light-licking bitch! Let us out of here!”

“Calm down in there, you two. I may be weak due to my body’s transition from Outer Darkness to the Radiance of Bliss, but I could still pour a pot of scalding water into that basket if I put my mind to it. Please, Mr. Reporter, forget about them and ask me another question. It’ll be time for my lunch soon and I’ll have to move out onto the balcony to absorb it before the rain comes.”

“Okay, Ms. Shine. Let’s get right to the fact that a lot of people think you might be just a little bit off your nut, here. How do you really expect to survive very long at your age on nothing but water and what little sunshine the poor, pale mushroom-people of Seattle manage to see in an average week? Why do you feel the need to film a process that is most likely going to end in your painful death?”

“Let the disbelievers of the world mock all they wish. I have opened my Wonder Portals to the Possibilities of Light and soon the entire world will have the pleasure of watching me draw upon the power of the Universe to achieve the state of Perfection taught by our holy guru, Jasmuheen.”

“Yes, well, are you aware that ‘Jasmuheen’ has not only been debunked as a dangerous fraud but that her teachings about air-diets and living-on-light have been directly linked to the deaths of at least four people attempting the very thing you yourself are about to attempt? Are you aware that the woman you call ‘Jasmuheen’ profits from her pseudoscientific poppycock while admitting to the occasional piece of cheesecake and bowl of Cap’n Crunchies?”

“Naysayers are forever dwelling in Perpetual Blackness. They have no authority to judge the superior existence of a being like Jasmuheen. Those poor unprepared souls who died while attempting the Journey were clearly saddled with defective Wonder Portals or else they had no Wonder Portals at all. Who can say? Their deaths were likely the fault of their own metaphysical misguidedness. I am a Breatharian-certified Level Six Mystagogue when it comes to the School of Eternal Luminescence. I have the online diploma and everything. No one on this planet is more prepared for the rigors of the Majestic Transmogrification than I am.”

“That’s all most fascinating, Ms. Shine, but there are many medical professionals who wonder whether your practices just might be the result of some hidden psychological disturbance.”

“QUIET IN THERE! Or I’m letting the cat inside tonight.”

“I believe we have covered all the bases that need to be covered, Ms. Shine. Thank you for speaking with me. Let me be the first to wish you the best on your strange and perilous journey. I hope you’re not forced to start gnawing your own fingers off when your brain begins to shrivel and you start experiencing hallucinations.”

“Good. Take a hike, O Ye of Little Faith. It’s time for my late-morning oxygen snack, anyhow. You remember where the door is. I’d show you myself but my legs have stopped working.”

“Pipe down, already, you two. He’s gone. And by the way … I was lying about my legs. I can still make it to the kitchen and there’s a frying pan ready to go on the stovetop. The cameras don’t start rolling until tomorrow. No one’s going to know a thing.”

← Godzilla Vs. The Ghoul-Doxies of Planet Trollop. #moviesiwanttosee #kardashians #satire
When it came to rotting teeth in the ’80s, Sugar Bear left no child behind! #nostalgia #kidkibble →