No Amount of #HocusPocus Can Save Bad Movies from Themselves. We Love ‘Em, Anyhow …

RUDIMENTARY ANALYSIS: This movie appears to have been a gratingly earnest attempt by Walt Disney Pictures to ca$h-in on the craving of mainstream 1990s audiences for supernatural comedies, but the finished product was more garishly ill-advised than headliner Bette Midler’s entire film career. It may even be regarded as emblematic of her oeuvre, if you ask me. More processed and synthetically cheesy than a big chunk of Velveeta burning a toxic hole through a flaking Paula Dean-brand skillet, Hocus Pocus is so bad that you keep expecting Eddie Murphy to pop-up any minute and say, “Surprise! This is really my movie. See, I didn’t cause nearly enough brain-damage with my last piece of garbage and I’m still two years away from embarrassing the hell out of myself, Angela Bassett and the human race with Vampire in Brooklyn!”

No such luck, at least as far as a ridiculous Eddie Murphy cameo, which might have actually helped this disaster make some sense. After all, even a narrative travesty ought to have some degree of self-awareness in terms of its abysmal quality, and Murphy might’ve brought that dynamic full-circle. Instead, we witness a screamingly awful, bucktoothed and bewigged Bette Midler, a mincing and desperate-to-act Sarah Jessica Parker and Kathy Najimy nuke-bombing the last ramshackle bridge that spanned from her overrated turn in Sister Act to any viable future in Big-Time entertainment whatsoever. The plot? The story? Fuggedaboudit. Three sisters stupid and untalented enough to get themselves hanged for witchcraft back in olde Salem manage to resurrect themselves on Halloween night and proceed to flatten all of their enemies through the magical power of rotten dialogue, ludicrous overacting, deplorable comic timing and the merciless hurling of one mind-ulcerating horror movie cliché after another. Oh, I almost forgot: there’s also some inexplicably stupid storyline involving a black candle that needs to be lit by a virgin. You didn’t think these gifted cinematic luminaries were going to leave an important motif like that out of the equation, did you?

This film is gonna make me such a star. Bigger than that goofy little supporting turn in ‘Sister Act.’ I’ll have to beat the offers away with a stick!”

As adult-fare,Hocus Pocus is a festering piece of odiferous roadkill, very much akin to the kind of roadkill one encounters routinely along the Orlando interstate while heading to Disney World for a sweltering afternoon of terminal ennui. Unfortunately there’s no Pleasure Island at the end of this crippling entertainment journey, wherein one might drink! drink! drink! the badness out of one’s head via shots of tequila or perhaps vomit the very memory of watching Hocus Pocus from one’s scarred and aggrieved soul with bloody dry heaves retched into a sparkling, Snow White-approved Disney toilet bowl.

Why, yes, this is exactly the spot into which I’m going to shove an ice-pick through my agent’s brain for sending me the Hocus Pocus script. This is also the spot where I’ll probably shoot myself after seeing the box office returns. Oh, well … there’s always Vegas, isn’t there?”

Bette Midler has made some tacky, head-scratching career moves in her day, but this one was a whopper, even for her. I have to believe that Bette set her own hair on fire, cartwheeled into her agent’s office and smacked him repeatedly about the the skull with a rhinestone bedroom-slipper after sitting down to a final screening of this catastrophe. Sarah Jessica Parker … well, at least she was still presumably young and eager enough to sleep her way back into contention for roles, if that’s what she had to do. It might not have mattered: Midler and Najimy are so mesmerizingly atrocious throughout the flick that you barely notice Parker’s push-up witch-boobies amid the carnage, much less her grade school-level thespian contributions. Najimy must’ve gone straight home after the premiere of Hocus Pocus and promptly placed one of her poodles in the microwave, mad with the realization that her blazing sun of Sister Act success was surely about to set on a bleak horizon of asinine Veronica’s Closet one-liners and voiceover work for Mike Judge. 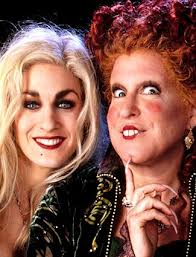 “Hey, Bette, I suggested that the producers ought to rename this movie ‘Hex in the City,’ but they told me button my lip and work this push-up bra with a little more moxie or they’d cut all my scenes! I’m starting to think that might be a good idea. The scene-cutting, that is.”

The film bombed like a bunker-buster at the box office and critics were generally as unkind as I’m being, to put it mildly. At least my review of Hocus Pocus is satirical and meant to be a bit over-the-top funny; I respect the work of all of these entertainers, more or less. Film critic Ty Burr (of Entertainment Weekly) lambasted the movie, however, writing that it was: “… acceptable scary-silly kid fodder that adults will find only mildly insulting. Unless they’re Bette Midler fans. In which case it’s depressing as hell … the sight of the Divine Miss M mugging her way through a cheesy supernatural kiddie comedy is, to say the least, dispiriting.”

Despite years of mocking from peanut galleries far more prominent than my own, Hocus Pocus did indeed go on to become something of a cult-classic on DVD-Video/Blu-Ray, where so many egregious flops have an opportunity to redeem themselves financially, if not artistically. The relative success of the film on video as a kiddie crowd-pleaser makes a lot more sense because children don’t really give a rat’s ass about Bette Midler’s dubious track record, unless they are possibly going to emerge as gay children. It might be a good idea to arm yourself with some helpful pamphlets about affirmative parenting if your eight year-old son watches this film at home and you catch him making a remark like: “Bette’s sharpest instincts were clearly not at play when she opted for the role of Winifred Sanderson. Winifred Sanderson is badly lit. Winifred Sanderson’s coiffure is unflattering. Winifred Sanderson’s rendition of ‘I Put a Spell on You’ is nothing short of ghastly! Who’s responsible for these horrifying arrangements?”

As mindless fluff-stuff for five and six year olds around Halloween, Hocus Pocus is ideal, minus Parker’s nicely overemphasized rack and the genuinely warped & creepy subplot involving a black candle and a virgin-girl. This fact alone, however, underscores the reasons why the movie remains so utterly repellent as suitable fantasy entertainment for anyone literate over the age of fourteen; the flick was marketed to a primarily adult audience. Yikes. One hopes that Bette Midler’s agent lived long enough to secure better parts for other actors and, hopefully, Midler herself made some sort of back-end $$$ deal with video distributors to assuage her lifelong humiliation. Money’s good like that. We all know that Sarah Jessica Parker survived this train-wreck to inspire millions of fashionable women and gay guys to become jovial, Cosmo-swilling alcoholics via Sex and the City, and Kathy Najimy really did do some excellent –even iconic– voiceover work as the feisty Peggy Hill in genius Mike Judge’s classic (and sinfully underrated) King of the Hill series.

Never fear. A determined actor or writer can overcome any mega-bomb. Sometimes all it takes, ironically, is a little hocus pocus.

← Here’s to the Dads who taught us to breathe radioactive flame & destroy our enemies! #fathersday
Mexican Volcano Erupts in Reaction to #Kim-K Spawn (Oh, Don’t Look So Surprised.) →