CULTURAL TOXICITY QUOTIENT: 10 (Surely this Giant Space Penguin is yet another astrological sign of the Coming Chastisement of Creation for allowing TV Cable networks like The National Geographic Channel and The Learning Channel to devolve into putrid cesspits of showcased debauchery and human depravity-on-parade. Come, Space Penguin! Put us out of our collective misery!) 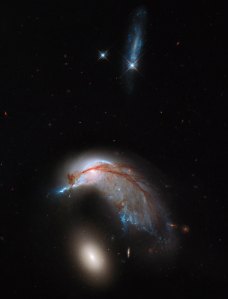 Astronomer Martin Spandau de Vroome cautions the citizens of Earth that the terrifying Giant Space Penguin seen so clearly in the above photo taken by Hubble telescope is still light years away from posing a threat to Earth. There are, however, other menaces far more capable of Unfathomable Doom hurtling toward us even now …

RUDIMENTARY ANALYSIS: The ever-nosy Hubble Telescope (which is almost as voyeuristic and quick to spot oddities as my late Aunt Florence, who sat peering obsessively behind her kitchen curtains at our family day after freakin’ day, year after freakin’ year until we finally placed her on that 51/50 Hold) has apparently spotted a Giant Space Penguin hurtling toward earth with its egg in tow. Professor Martin Spandau de Vroome, of the Dayton, Ohio Astrological Society and Planetarium reassured frightened citizens that this intergalactic menace is not as unusual as one might think.

“We are forever spotting giant space penguins,” he noted dismissively during a conference call with NASA, Graydon Carter of Vanity Fair and Bindi Irwin, the Dancing Jungle Girl. “Giant space penguins are always flying by earth like nasty, flapping asteroids but it’s been millions of years since one has made impact. In fact, many scientists are now taking a second look at what sort of catastrophic event killed-off the dinosaurs and, instead of a massive asteroid, they are beginning to wonder, ‘Could it have been a giant space penguin’? We are not ruling this out and further studies will be done, you’d better believe it. I would not lie about such things. We are in the process of raising the additional nine trillion dollars needed to investigate the dangers of imminent collisions with Giant Space Penguins and what we may do, if anything, to deflect a Giant Space Penguin if we discover a Giant Space Penguin to be on course for a direct hit with Earth. Probably we shall petition Congress to dismantle the Post office and redirect all funds to us for this purpose. The Post Office is doing a terrible job these days and they are even crazier than astronomers, so who needs them, anyhow? As for this Giant Space Penguin, well, this penguin is too far away, in the Hydra constellation, to pose a problem right now,” added de Vroome. “I’d be more worried about the three other hideous monstrosities that the Hubble telescope has discovered heading toward our planet at an alarming rate of speed. I will show them to you now. May governments across the globe be warned and may God help us from each of these calamities.” 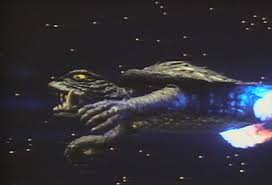 PROF. de VROOME: “As you can see, Gamera is headed straight for earth and he means business. Giant Space Turtles are actually more dangerous even than Giant Space Penguins. Few people know that, but it’s true. I would not lie about such things. I suppose it is because most of the uneducated peasants on our planet believe turtles are slower than penguins and thus less of a risk. But flying turtles are obviously faster than penguins because they can fly whereas penguins cannot fly. I mean, put two plus two together, people! My God, read a book. Take a class. Lucky for Earth these Giant Space Turtles always seem to hit Japan and then bounce away, for some reason. We don’t know why. Still, it’s not good. I understand that Japanese teenagers are pretty busy licking each other’s eyeballs these days, when they should really get busy and start to lick the lenses of Japanese telescopes! Send these eyeball-lickers to the planetariums of Japan where their eager tongues will prove useful to their country! Lick the telescopes like your tongues are swift as hummingbird wings, you demented Japanese deviants! Gamera is on his way. I would not lie about such things.”

PROF. de VROOME: “Yeah. I know. Sinead O’Connor. We had been wondering whatever the hell happened to her, too. Well, now we know. She’s been floating out in space all these years. Makes sense. Hubble picked her up spinning around near the constellation Orion the other day. Sad news is that she’s gonna hit. Good news is that she will only have ONE HIT. Maybe take out a city the size of … Oh, I dunno … Vatican, maybe? Who can say. Anyhow, you can see the Pole Star right behind her ear as she spins to earth. This is proof that Hubble can pick up almost anything with its Big Freaky Eye! Who knows. Might be good to have her back, Sinead O’Connor.”

PROF. de VROOME: “What can we say? It’s the muppet ship from Pigs in Space. It was bound to come back sooner or later. We can only hope it falls into the ocean somewhere or burns into so much rinds of frazzled pork upon entering the atmosphere. Pigs. In space, for God’s sake. Who would have guessed? But as you can tell, Hubble sees ALL and it’s been a scary week for the people of Earth. Scary, scary week. Going to get scarier, too.”

STAY TUNED AS POP HAZMAT KEEPS YOU POSTED ON THESE HORRIFYING ASTRONOMICAL DEVELOPMENTS … HUG YOUR CHILDREN AND SPEND TIME WITH YOUR LOVED ONES. WE DON’T KNOW HOW MUCH LONGER WE’VE GOT.
__________________
If you’re bored and don’t have any Japanese eyeballs to lick, hop on over to Jonathan Kieran’s Official Facebook Page and give it a Like!

← “Your mother was a Japanese bathhouse witch!” #notaninsult #animatedmovies
The things a star will do when denture ads just won’t pay the rent! #nostalgia →