They’ve handled this sort of thing for centuries at #Downton. 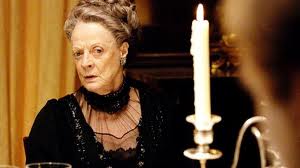 “What’s this I hear? You say that some illiterate troll referred to Lady Mary as a ‘stupid f*%king heffa’ in the comments section of an online article? For no reason whatsoever? Why, the solution is quite simple, my dear. Hack into the system, trace this individual’s IP address, find out where they live and have them killed. It can all be managed before dinner. Trust Granny, the world will appreciate the added breathing space. Now, kindly tell Carson to send ’round for my car. We have work to do.”

← It could be worse. I hear Aquaman is selling #timeshares.
“Robbing Debra Winger like a common 7-11 for Terms of Endearment. Ghastly woman.” #downtonabbey →

One Comment on “They’ve handled this sort of thing for centuries at #Downton.”