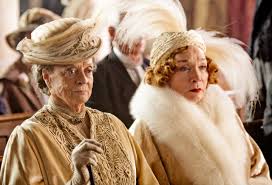 “I’d dearly love to tell her to get out of town, along with the horse she rode in on, but it’s obvious she shot the poor creature and shoved part of its tail into that ridiculous hat. [sigh]. Americans. What’s to be done with them, I ask you?”

← They’ve handled this sort of thing for centuries at #Downton.
Well, I certainly wouldn’t choose Will Ferrell for the part. Too solemn. #daydreams →