‘Matriarch’ is not a term to use lightly. Ask any #dowagercountess. 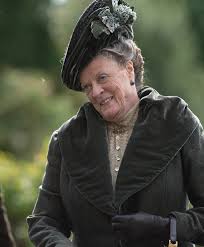 “I was enjoying a perfectly lovely walk in town with Cousin Isobel the other day when suddenly this woman with bright orange skin and a mouth like a cat that had just eaten its own kittens came up and introduced herself. ‘Oh, you must be the Dowager Countess of Grantham,’ she said. ‘I am Kris Jenner, Matriarch of the Kardashians of Beverly Hills. Perhaps you’ve heard of me?’ I said, ‘My good woman, I’m sure your sterling reputation precedes you wherever you choose to flit across the planet, but if you’re going to dawdle in England it is imperative that one master the proper use of terms and titles. I am a matriarch, while you, my dear, are most decidedly a Madam.’ Oh. I say. Isn’t it lovely when one can help a foreigner make those crucial little adjustments in society? Now, pass me a glass of that champagne, Carson — doing a good deed always leaves me a bit parched.”

← “Just spit in the wok, Letty, like I told you.” #magicalcookware
Ron Perlman has always been an outstanding beast in “my book.” #characterprofiles →