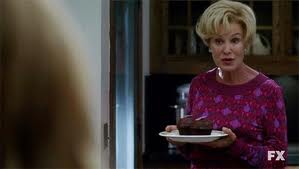 “Sure, I thought about bringing you something from one of those trendy little shops that sell a fancy sort of cupcake, but you don’t strike me as a ‘fancy cupcake’ sort of person, so why on earth should I waste perfectly good money that could be spent on cigarettes, whiskey and the affections of a 25 year-old boy-toy with six-pack abs and a brain the size of a walnut? Here. I picked this up at that grimy Korean market on the corner. It’s a Devil Square. Made by a culinary genius. Calls herself ‘Little Debbie.’ Welcome to the freaking neighborhood.”

While Jonathan works to complete his new novel (slated for release in Spring 2014) blogging will be swift, light, fun and generally of the “drive-by captioning” variety. Meanwhile, if you’re bored and don’t have any Japanese eyeballs to lick, hop on over to Jonathan Kieran’s Official Facebook Page and give it a Like!

← “What is it, Mr. Bates?” #downtonsatire
Sigourney W? Yeah, she has the chops and the cheekbones to play a #goddess. →