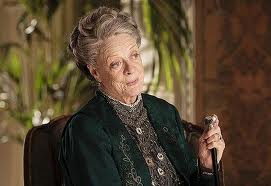 “Good heavens, you Americans need so much affirmation. In my day, one was ‘affirmed’ by a properly cooked egg delivered promptly to one’s bedside by a reasonably clean servant, with a bit of toast and jam on the side! Even so, here’s to wonderful women this 4th of July — wherever they come from, however they live, whatever they look like, whomever they love, and whatever they do for work. Yep. All of them. Oh. Wait … may I qualify that statement …

For the lovely lovely darling souls who actually follow the HazMat I do indeed want to note a couple of things:

1. I am deep in the entrails of completing a new novel, so this is why I am whittling things down to tart little Downton Abbey photos with the poor Dowager Countess (yeah, right … “poor”) being made to say all sorts of things she would probably say, anyhow, if she were real and living amongst us.

2. Until I complete the new manuscript, expect short blog entries … and by all means have a safe, happy and hilarious 4th of July if you live in the USA or if you are celebrating abroad. I always believe a broad should be celebrated more than anything else on this earth. Don’t quote me on that, quote Sinatra: “She was one helluva broad.”

Wouldn’t it be sort of nice if we could curtail just a teensy-weensy bit (just a little …) of the PC bullshit and freely honor all the great broads in our lives?

Here’s to wonderful women this 4th of July — wherever they come from, however they live, whatever they look like, whomever they love, whatever they do for work. Yep. All of them. (Oh. Wait. Not the Kardashians. They are not to be celebrated or respected. Ever.* That will never change, here.)

More importantly: please keep the families and loved-ones of the firefighters who gave/lost their lives in Arizona in your prayers/thoughts/good feelings/positive emanations as you enjoy the company of your own sweet loved-ones in the next few days. All or any of the above-mentioned efforts have real power, dear friends. Believe me. You don’t have to be Christian, Buddhist, Pagan or even believe in anything for your LOVING THOUGHTS to make a difference in this world.

Heroes always rock, but they especially rock on July 4. God (or Goddess) Bless.

* I shouldn’t say “never’ or “ever.” It may change if the mother-baboon comes out and says, “Yeah, sure, I held the camera and filmed my own daughter getting pissed-on and pummeled by some dude because we all wanted fast money and we were willing to debase ourselves shamelessly to achieve that goal, again and again and again and again. Now look at my girl. She walks around like she’s untainted virgin royalty from some trendy European principality, but I gotta tell ya: Lately, people are sayin’ that when she walks into a room, you can smell the scent of death. Yeah, I’m talking plague-type shit. Leprosy on the ass of a demon shit. They say she smells like the ghoul that walks into the party in that Masque of the Red Death shit that the Pope wrote. Or Edgar Allen Pope. Who knows? I got an education, but of course I laughed at it and chucked it down the can like anybody else does. Ha ha. I dunno. Our actions probably did not advance the cause of women around the world, due to our abject and deliberately calculated** whoredom. Who can say? Is that what you want me to say? Fine. I’ll say it. Now pay me or I’ll cut your friggin’ throat from ear to ear.”

** Yes, the mother-baboon is more than rancid enough to hypothetically employ a redundancy like “deliberately calculated.”

← I’d feel no #misery if the great Kathy Bates played one of my witches. #characters
No one quotes a non-existent scripture like the #dowagercountess. →