Mark Your Calendars! To Celebrate Halloween 2013, Jonathan’s wild & witchy All Hallows Eve-themed novel, Rowan Blaize and the Hand of Djin Rummy, will be available for FREE KINDLE E-BOOK DOWNLOAD from 12AM October 27 until midnight October 31! That’s 5 days to scoop-up this cauldron’s brew-of-a-tale, set amidst the magical mischief and mayhem of St. Augustine, America’s Oldest City. Click HERE when the time comes to fire-up the imagination (and your Kindle) this Halloween! See below for more details about the book …
________

It’s going to be a simple affair–nothing fancy. I know you’ve come to expect exquisite and complex gastronomic masterpieces from me, and you have every right to desire more of my singular genius in that regard, but this Tuesday we’re going to strive to keep things simple. I’m talking burgers, brats, beer and maybe a bit of salad. Okay, you want appetizers? I’ll have chips and salsa. Happy now? Does that satisfy your greedy little mealy-mouthed palette? I’ll even start with my whirled-renowned homemade stuff. Here’s the bowl. Here’s my secret ingredient inside the bowl. All I need is the pestle. Where did I put that damned thing, anyway? And, hey! When it comes to recipes, don’t tell anyone. I mean it! Some of my guests are a little unsophisticated, they aren’t used to exotic ingredients, and I don’t feel like explaining a lot of culinary minutiae to them if they suddenly find themselves in some sort of “intestinal distress.” Like I care. To reiterate: This cookout is going to be low-key. No headaches. 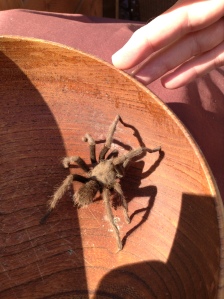 No, you don’t have to bring anything. In fact, you know what? Don’t even come. There’ll be more food for me, which is what I really want most in life, anyhow. There. I said it. The whole world knows. Big freakin’ deal. But if you do come, keep in mind that this is strictly a backyard, chillin’-on-the-deck sort of thing. The weather is supposed to be warm and sultry. Wear shorts. Show off your legs. All eight of them, if you want. I don’t mind. I really don’t. 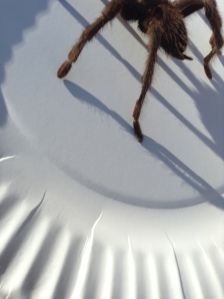 ← The world of dating is a tale of meet, greet & eat for #tarantulas.
The King IS Coming to Save the World in 2014. Make No Mistake. #godzilla →

One Comment on “Strictly beer, burgers & brats. Wear shorts. Show off your #legs.”