When all else fails, pose with an electrified cat. #Standards

Lately I am loathe to play any sort of role as just one more babbling voice in what I call the “Great Cacophony” — this seemingly infinite and overloaded universe of disparate, narcissistic voices clamoring and competing for attention in the cyber realm and elsewhere. I do not want to become one of those paragons of vanity who bombards fellow human beings with pointless and banal quips, quotes, updates, adages, jokes, links, sound-bites, snippets, essays, recipes, shout-outs, opinions, ejaculations, emanations, contemplations, and all manner of self-absorbed and/or self-serving eruptions that, in general, amount to little more than a truly apocalyptic trumpet-blast of garden-variety flatulence accosting the already befuddled senses of Earth’s inhabitants.

Too many people are making too much noise … when so precious few have anything truly valuable to say.

Be that as it may, the masses will always determine what does or does not possess inherent value, and what merits enthusiastic adulation and attention — divided or undivided. Admittedly, the track-record of “the masses” in this regard has been (and remains) rather spotty throughout the history of civilization, cf. Witch-burning, Vegemite, Fifty Shades of Gray, Velveeta, A Walk to Remember, The Kardashians, etc. etc.

Nevertheless, it behooves any true artist in this potentially cataclysmic epoch to let his or her work speak for itself, without the frightful din of too much self-obsessed explanation or the adornment of superfluous exposition. Create and reveal, then let the precious chips of widespread approval or acclaim fall where they will, that’s what I say! I have learned few greater lessons in life than this one: people do indeed define “success” quite differently and according to their own measure of personal happiness and satisfaction.

It is for this reason that, keeping in mind the noble self-restraint about which I have so eloquently pontificated, I shall henceforth endeavor to promote and market my work solely by the means of posting naked and near-naked super-duper sexy photos of myself.

The rest can be managed by a particularly loquacious and over-caffeinated publicist.

Standards, after all, have got to start counting for something, again. 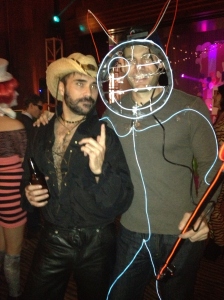 Yours Truly, Halloween 2014, The Clift Hotel Party, San Francisco. (Don’t know who the electrified cat was, but few could keep their paws off me that night. Must have been the hat …)

One Comment on “When all else fails, pose with an electrified cat. #Standards”